Holy shamolieeees!! You won't beleef what happend tonite! Me and Buddy were watching out the big back door window, which mom had opend becos it is so nice out. Mom looked over and saw that not only was Bernard (our wild bunny friend) out there, but he had a friend with him too! 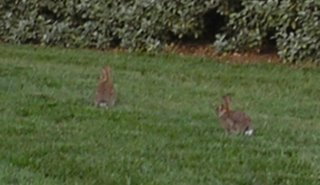 Or maybe it was Mrs. Bernard, we don't know for sure. Mom tookt a pikcher of them, but as usual, it was throo the screen so it din't look verry good. Then they kind of hopped away. So mom went and got some baby carrots and opend the screen door just a little to put her arm owt and throw the carrots out there. And guess what??? Buddy shoved his nose throo and then his body and he was outside!!!

Buddy didn't try to go after Bernard or Mrs. Bernard, he just ate some grass, ran over to the neighbor's door and ate some grass there too. Mom was so bizzy following Buddy, she din't even notice me come out the screen door too! I rolld and rolld on the cement, it felt soooooo good to scritch my dead furrs out. 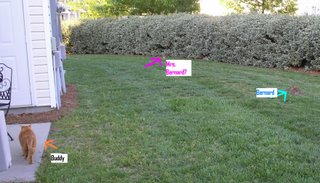 Mrs. Bernard saw Buddy and she quickly went and hid in the bushes, but Bernard kept eating grass and pretending like he din't see Buddy. I think he was very brave. But then, Buddy noticed Bernard and he went ZOOOOOOOOOOOOOOMMMMM chasing after Bernard!!! He ran so fast and his tail was all flooofed up!! Bernard ran reely fast too! Then mom ran fast into the house and scooped me up on the way and made me come in. Then she grabbed the can of treets and ran out the front door to look for Buddy.

Mom thot Buddy would be way far away from our house or maybe even losted and she was furry worryd. And she was worryd about Bernard too. She din't see Bernard at all, but Buddy was just hanging out eating some grass with his tail still floofy. And there were some birdies swooping around and saying rood things to Buddy. So mom just scooped him up and brot him in the house. And that was the end of Buddy's Big Adventure Chasing Bernard. Now mom is worryd that Bernard was so scared he mite not find his way home to Mrs. Bernard and what if he doesn't come bak to eat the carrots and the nice grass that grows from the bird seed.

I guess we'll just have to wait and see.

Dear Buddy,
I guess a Bernard in the flesh was too much to resist- good job not pouncing him! Glad you got a rolling scratch and a spring fever run! Our long ago Calico Ivy used to run out the front door and down the steps-just as far as the side walk to roll and scratch her back.
I had a pet rabbit and Ivy would have loved chasing her!

Wow...good thing Buddy didn't run off. I bet Bernard found his way back to his bunny friend. They're smart that way.

Wow! That was some big adventure!! We agree wif Max about Bernard....buns are pretty smart- for not being cats!

Oooh, I would love to have an adventure like that, but I think that Mom would have a heart attack.
~Knightly

I got out at couple of times in one night and it made Mum really upset. Thankfully, she found me trying to climb through her neighbor's window; so she scooped me up and hugged me tight and said "Don't do that to me again - my heart can't take it!"
~Firenze

Us boys try to sneak out every mornin' with the doggies. We eat the grasses and climb the trees. Punkin tries to catch the birdies. We try and tell him that if you catch the birdies then there won't be any to look at. He just doesn't get it I guess.

Wow, that's quite an adventure! I especially like the floofy tail part.
~ moose

Oh my gosh! That is so furry exciting! Wow.

Finny that was a very good report. i bet Bernard found his way home, so don't worry. he seems like a smart bunny.

Oh Buddy & Finny what a cool adventure. We love that picture of Buddy trotting off on a mission. Don't worry. your bunny friends will be back. Brobably with relatives and young ones because that grass looks so lush.

I'm sure Bernard will be back, his love of the grass and carrots will be stronger than his fear of Buddy!

Mom says Bonnie's Bunnies are sumtimes in our yard an the first Spring my bean lived here, there were baby bunnies living under the deck out back. I guess M/M Bernard aren't Bonnie's Bunnies since they're in your yard, not mine. You guys was smart to stay right close to the house an not run far.