Buddy has gone to the Bridge 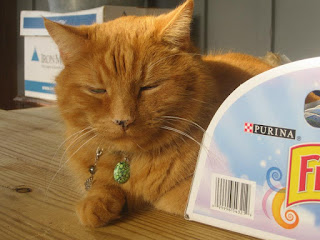 I can't bring myself to write out all the details. I was in NY to visit family and attend the retirement party of an old friend. My sister Marj, who my cats and I live with, called to say she thought Buddy was dying. He had been diabetic for about a year and a half; we were working hard with his vet to get his insulin right, but we just couldn't get the magic number. Apparently, there has been something else impacting his health that we had never discovered. He had one attack of pancreatitis in the summer, so it's possible he had another. Something dropped his blood glucose level extremely low, caused him to start having seizures and eventually caused me to have to make the decision to let him go ahead to Rainbow Bridge. 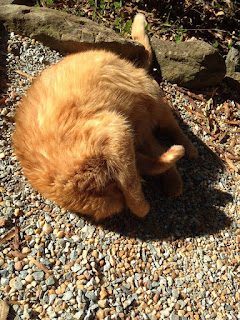 I'm so glad this wonderful cat entered my life when he was three years old to become Finnegan's brofur and friend. Buddy was so very special! He wasn't a huge lover like Finny; he liked who he liked - and the rest of the world had better be careful. He might let you pet him, but on very specific terms. In the time since Finny died he had become more affectionate, snuggling with me as often as he could and for much longer periods of time than he used to. 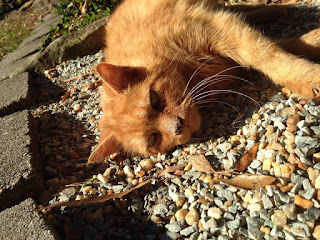 I'll miss his paw on my nose to wake me in the morning, his loud mrow-mrowing at night as he played with his very special strip of fleecy fabric, his soft purring that became snoring, racing me down the hallway to the bathroom to drink from the faucet, giving him his insulin shots twice a day - of course followed by a little squirt of whipped cream! Most of all, I will miss the sweet, loving, snuggly orange boy who shared our lives for the last twelve years. 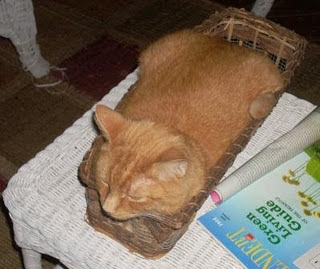 Buddy is buried in our little pet cemetery, near his brofur Finnegan, Cuzzin Dusty the cat and Cuzzin Magic the good woofie. He has in his arms a very special nip toy made here in North Carolina, some squishy pompoms, a nip mousie, his fleecy strip and his "Critter Baby"; a toy that came with him when I adopted him from a friend of a friend 12 years ago.

Fly free, my Best Bud. You'll always be my Sunshine, my only Sunshine. 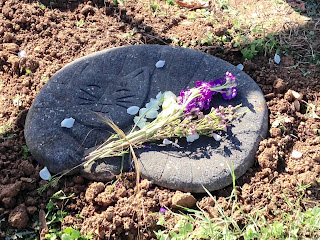 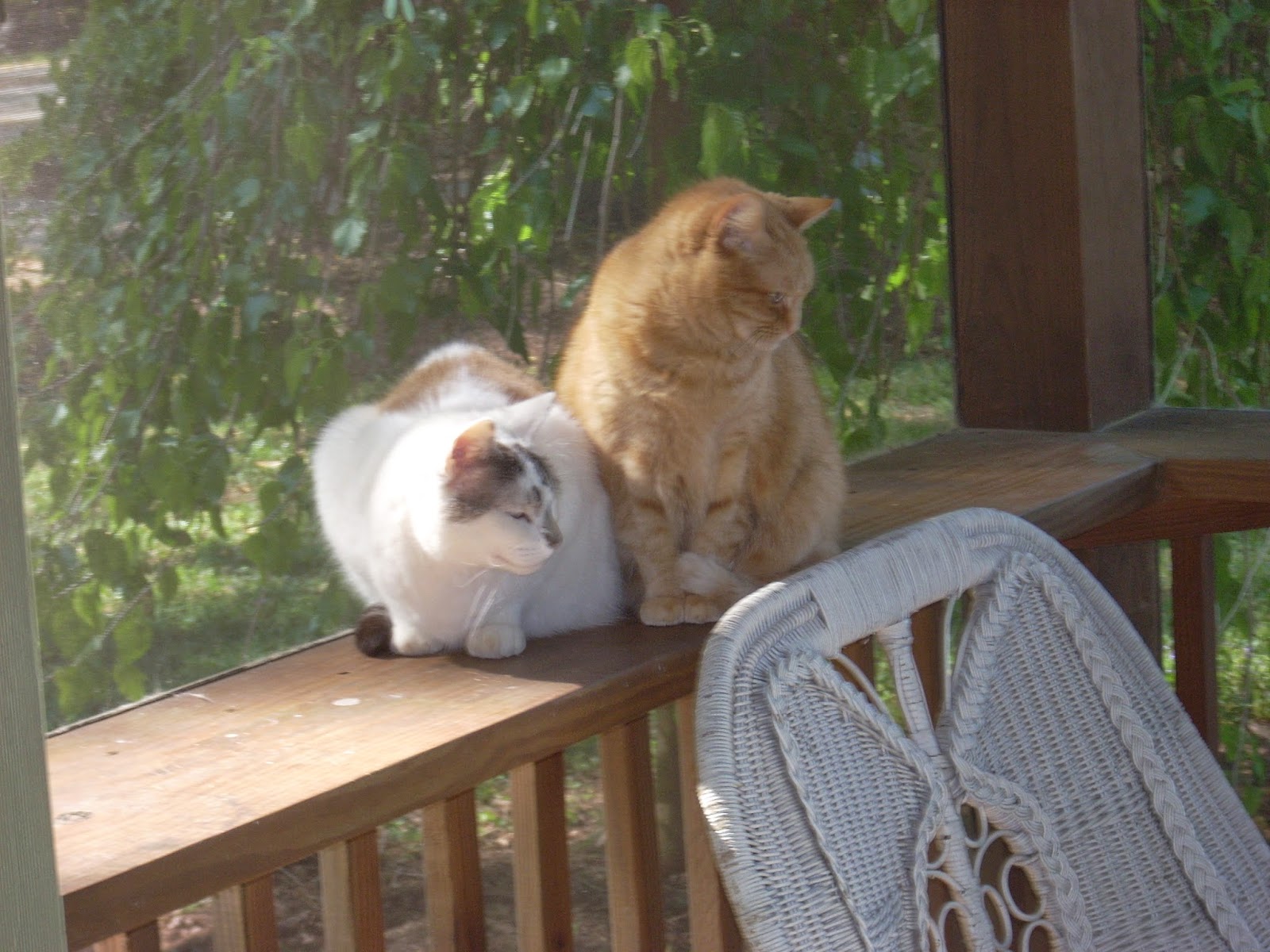 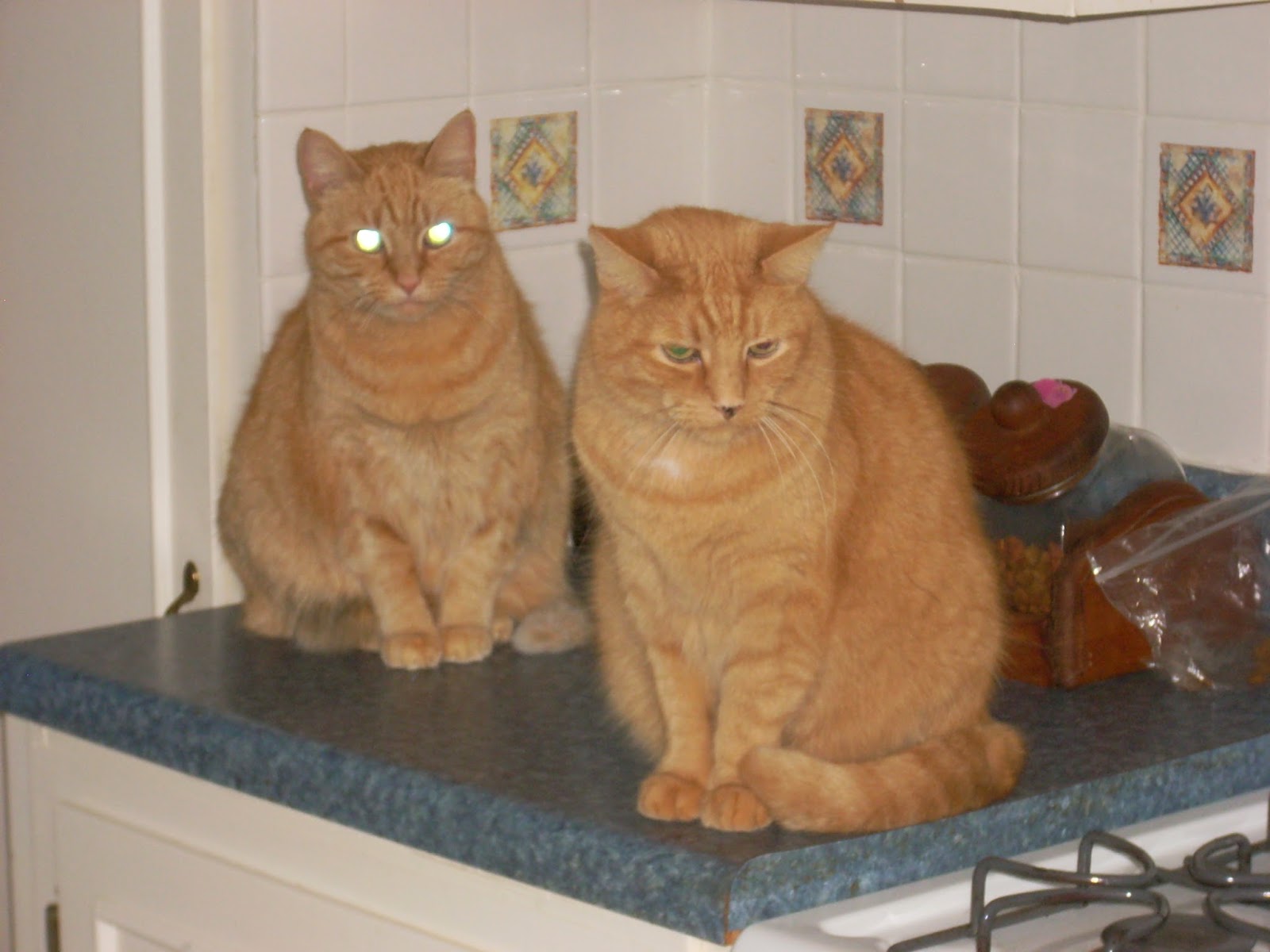 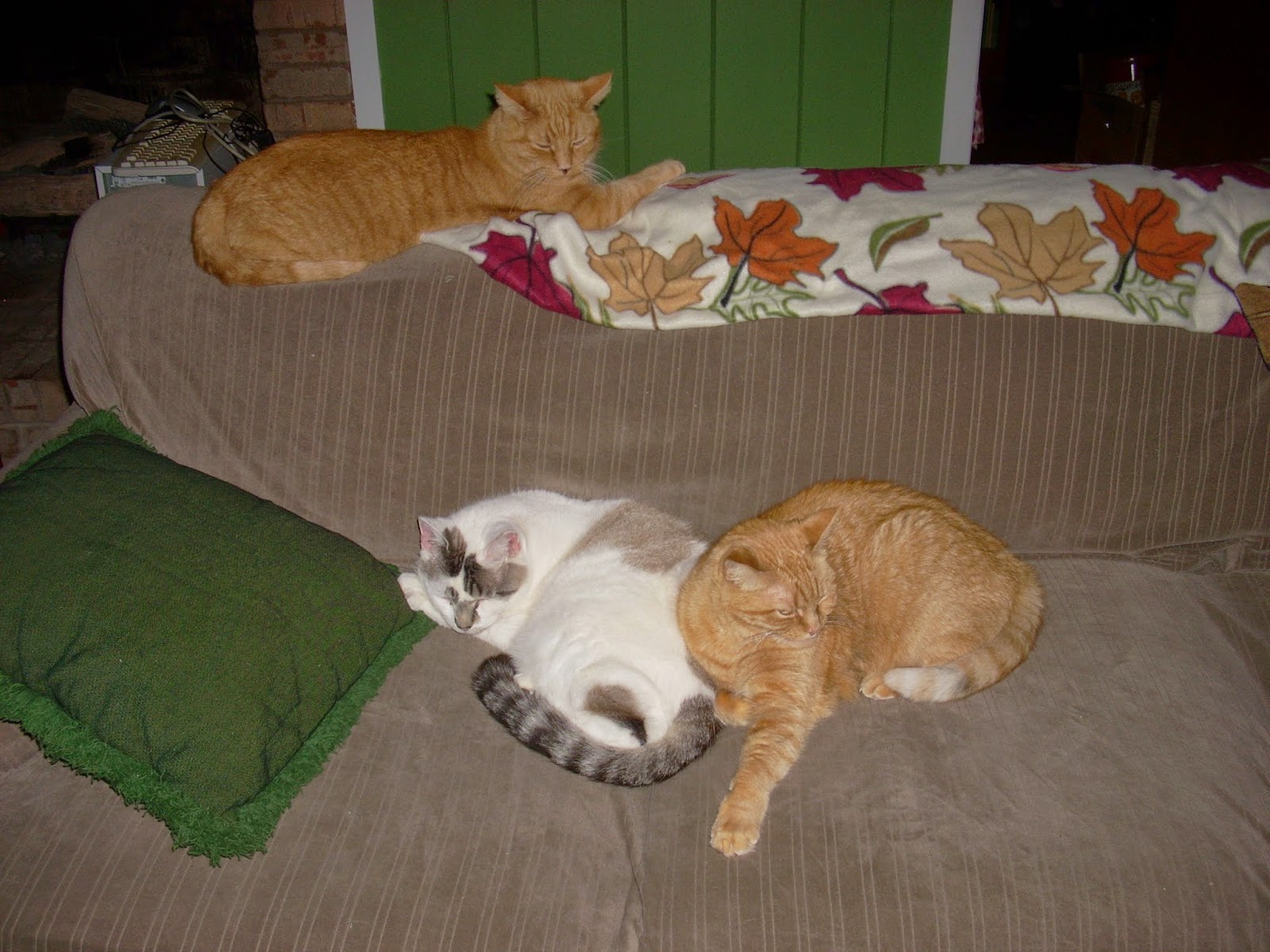 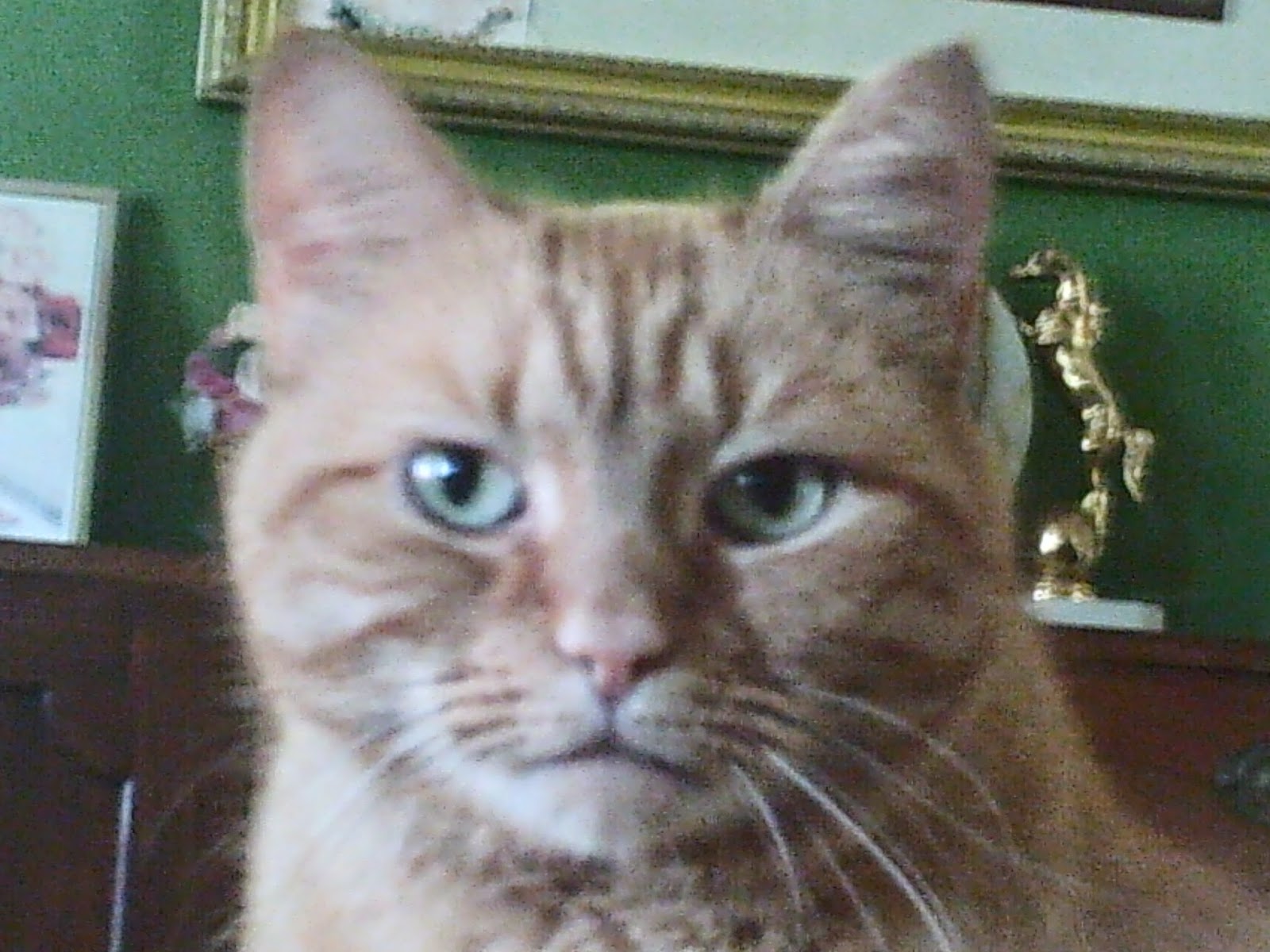 I haven't been feeling furry well for a few days now and this morning Mom and my nice v.e.t. helped me to begin my journey to Rainbow Bridge. I've been fighting the megacolon problem for a couple of years, but I got really tired of the medisins and feeling crummy alot of the time so I decided it was time to go.

Mom, Ant Marjie, Ant Ree and my good Grandma were there with me, giving me lots of hugs and kisses and messijs for Grampa and all of our fambly cats who have gone ahead.

I know Mom and the rest of the beans will miss me, but Buddy and Jazzy and Cuzzin Cavalli and efen the woofie Callie will take care of them reely good.

Once I have a nice long ride on my good Grampa's shoulders and see my little sis Daisy, I'm going to start looking around for Skeezix and Kismet and Fat Eric and Miss Sanjee and sooooo many other furiends who have gone ahead.

I'll see you all someday! 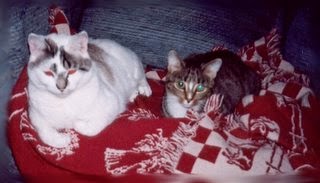 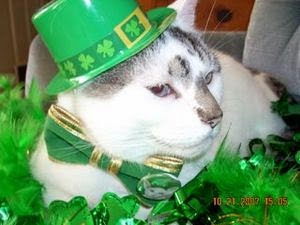 Our Good Grampa has gone to the Bridge 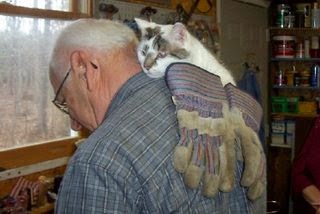 My good Grampa left for the Bridge on Friday. Grandma, mom and all the aunts and uncles and nieces and nephews are furry furry sad. I was at the nursy home wif Grampa, keeping him company for the last day and a half.

I will miss the best Grampa ever. But I know I will see him at the Bridge, I will jump on his shoulders and we'll walk around together.

It is 6 yeers since mom bean went to the Wake County shelter and brot home a sisfur for me and Buddy. We weren't furry happy about it at first, and Jazzy REELY din't like us, but we've all gotten used to each ofur and we're a big happy fambly now. 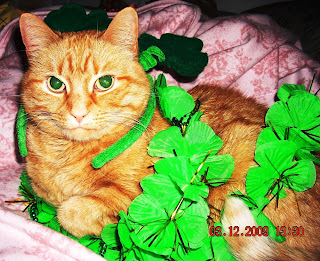 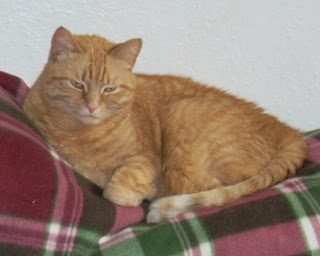 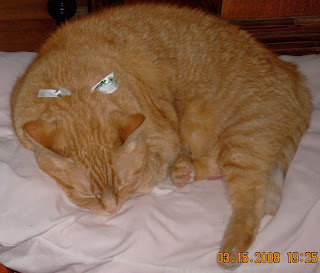 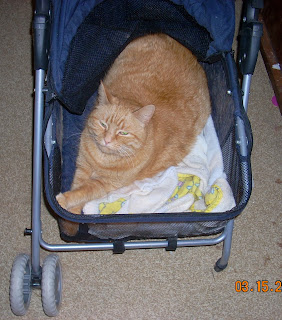 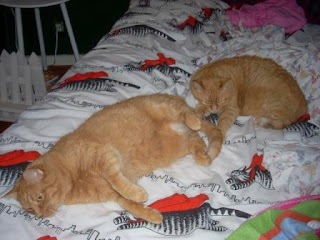 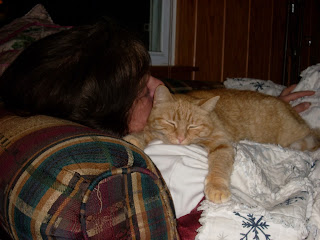 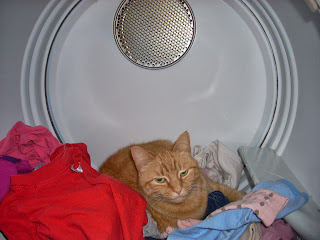 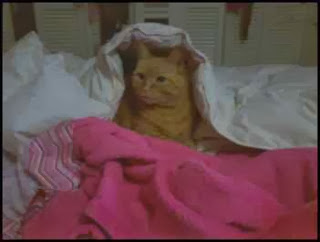 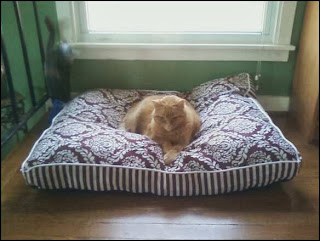 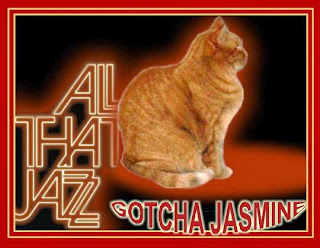