Efurrycat has prolly seen Skeezix's reports on the nise hotel he and Mao stayd in last weeksend wile the Food Lady and Mr Tasty Fase were on vacashun.

We were reeding the new blog that Skeezix tolld abowt, starring, Minx, Muffin and Ebbie . There mom bean was looking for a nise hotel in there town but she coodn't find one! So she rote a furry good post abowt her advenchers in chekking owt diffrunt hotels and wich one she finely deesided wood be good enuff for Minx, Muffin and Ebbie.

Efurry bean shood read this post and make sure that if you absolootly haf to leave yore poodins wif strangers at a hotel or cattery, they follo these tips and find a furry good one. 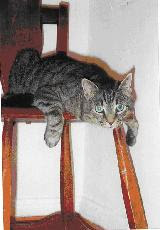 We wood also like to menshun that if you or one of yore fur siblings needs speshul attenshun like medisin or speshul foods, yore mom or dad shood make sure that the staff at the hotel or at yore vetty bean's office knows eksakly wat they are doing! Chek owt this site abowt a furry speshul diabetic poodin (sugarcat) named Toonces who was given 10 times too much insulin by a bean who was not a vetty or even a vetty tech. As a result of this horribul overdose, Toonces was severely brane-damaged and his life was shortened drastickly. Don't let somefing like this happen to you or somecat you love!!

Heer is the furry nise hotel that owr brofur who came befor, Jasper, used to stay at and I (Finny) stayed at a few times too. Pet's Companion Inn is in Bahama, NC and the beans there are furry nise. They have nise big plases for droolers downstares and nise big plases for poodins upstares. Jasper used to like to sit in the window and watch the droolers wen they were playing owtside! 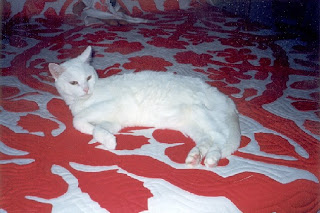 Be sure to talk to yore beans and make sure they kno that of corse, they shood nefur leave you or go anyware wifowt you, but if they do, to make sure they do lots of reserch and find the bestest plase they can to take care of you.


This has been a Feline Serviss Annownsement. Owr regyoolarly skedjuled silliness will resoom tomorro wif pikchers of the First Stroller Ride.
Meows from Carolina Cats

Mom used to leeve us home and da gerl next door took care of us. She did an exsellant job and we loved her and trusted her. Den she grew up and moved away! Now we don't know what to do, dad sez get a profeshunal pet sitter but dey wood hafta come early in da morning and do Zippy's paw stretches and mom just doesn't trust any body to do it...

My beans put me in a kennel once. HISS! I much purrfur the girl from across the street, but alas, she's growing up, too. She locked herself out once... I was okay, but she was going to have a heart attack! My woman's car was parked at work with a garage door opener and a coworker had the car keys, so I didn't starve.
Good posts.

Thank you for the information. My mom uses the neighbor next door, she's very good. But you just never know about people, so it's always nice to have good information to go by.
Be blessed,
Samantha & Tigger

excellent, excellent advise to all poodies out there. We will remember this incase we need one of those soon ~poiland tribe

Thanks for the advice. We has a good hotel which our nice vet lady runs. They have an outdoor run and are very careful with any medicines they give to pussy cats.

We LOVE your stroller. Although we have seen them on the internet we love to see your pictures!! They sure are funny!! No New zealand cats we know have them as it is safe to run outside here. We have no predators - no snakes, crocodiles, alligators (except the ones in the zoo!!), no bears or wolves. It is very safe except for noisy dogs and bad cars!!!

Oh and dumb humans who might try to steal us for money!!!

You have fun in your stroller - Me and my mum think it is super COOL!

This information is good to have, although I've never stayed anywhere but with my beans. I'm not sure if we have any hotels especially for cats here - there's a pet health food store that has condos, but ...

I got a cat today! Now I can really be in the Cat Blogosphere official and everything. Wait til you see!!

You and your cat shenanigans (along with your booteful globe) are mentioned in my post today.

Have a wonderful day!
Mimi

We are so horrified at some of the things people do... We wont go to a kitty hotel unless we are forced. We are looking forward to your new stroller and ride pics! Sending purrs and hugs

Unless they're going to be gone for a squillion years {Mom: more than a weekend}, Mom and my Daddy leave lots of food and water and extra litter boxes for us and we do fine. There isn't a good place for kitties that we can afford in our area since the v-e-t where we used to go closed. If my Daddy hadn't been able to stay home with us when Mom went to visit Grandma and Grandpa in December the place for us would have cost more than the air fare!

You have given us some very important information. Toonces' story was horrifying.

Thank you for sharing that information. Especially because Momma has now decided that she's never going out of town again. Whee!

Memories of Eric and Flynn said...

Can't wait to see yoo in yer stroller.
We haf nefurr been to a cat hotel. When the Beans go away, we live in the garij which is hyooj.It has a downstairs called an inspexshun pit. It's always cool down there, so we don't git too hot when the sun shines. It has an upstairs loft too where we can sunbathe, and an outdoor run. One of the horsie ladies comes in twice a day to feed us and do our litter boxes. Dad powerwashes it furr us so we don't git dirty.

Hello there! We're glad to find more cute furry fluffies who live in North Carolina - also we love your stroller and think it could be good for bunnies!