Cuzzin Dusty made an Excape!! 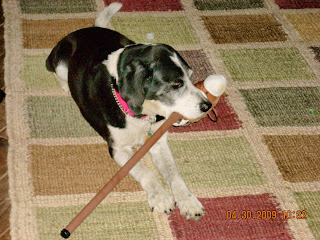 So yesterday morning, Ant Marjie was talking on the fone thingy and Magic-woofie was going bazerko woofing and whining at somefing owtside. Ant Marjie tolld Magic to hush hush hush...but then she wented ofur to the screen pawtch and there was Cuzzin Dusty - OWTSIDE!! 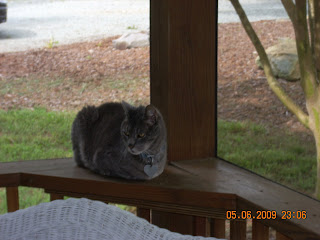 Cuzzin Dusty is 18 yeers old and he is deff and his kid knees don't werk so good and his bones ake from arthur itis! Ant Marjie was furry upset and worryd that a vishus deer or somefing werser cood haf gotten him, so she runned owt there and pikked him up and hugged and hugged him and brot him inside.
Then her and mom went running all ofur the howse looking for me and Cuzzin Cavalli. It was so funny! I was under Ant Marjie's bed just laffing and laffing but Ant Marjie fownd me pritty fast. And Cavalli was on the nise window seet watching owt the window, so she saw him fast too. Nekst time we'll haf to hide better.
I betcha you're wondering how Dusty got owtside, arnt'cha? Ant Marjie opened one of the windows and din't reelize there was no screen on the bottom part. Well, Dusty just went up there and jumped down to the grass. And it was probly 20 Gizzies high!! Mom and Ant Marjie sed he was struttin' arownd the rest of the day like he was a big advenchurer. Well he is!
Here's a picky of Dusty wen he lived in New Yawk and wented owtside all the time. 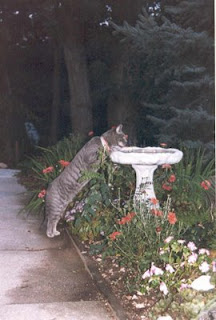 Looks like all of you are giving your mom some scary moments.

Hello! I love your blog! I am a Siamese kitty named Leia and I have just begun a new blog. I could use some support as I get underway - please link me!
http://home.comcast.net/~houseof7cats/site/

Let me know if you link me, and of course I will link you too!

Oh dear! I visited so many kitty blogs and left my link, only to discover that I needed to CHANGE my blog location! If you have been kind enough to link me, please adjust it for me. If you have not linked me yet, I would love it if you would!

Do let me know if you link me so that I can link you as well!

Did you move to the farm to be with your mum, grandpa and cousins? I am a little confused about who is where now. Sending big purrs for Grandma to feel better after her operation. My Cornish Grandma has to have an operation soon too.

oh jasmine, i hopes yu did not fret ofer dusty escapin too much. i wood not want yu to be so upset. it mite throw yur delicate system out of wack.

we is fery happy that dusty wuz found safe and sound. we is eggsited to hear abouts yur movin adventure.

We'd love to hear all about farm life, since we don't go outside! And wow, Dusty is one big, tall kitty! That's a cute pix!