The Cats who came before..(and a drooler too)

Our new friend Derby was shocked and hurt to find out he wasn't his mom bean's first-ever cat, but they talked and efurrything is ok now.

We have allways known that our mom grew up with lots of cats and we're ok with that becos there are so many cats who live in bad shelters or out on the streets and don't have nice warm houses with stinky goodness and computers and blogs and friends around the world. So we think all good beans should have a couple of cats and like mom says, "Every Life Should Have Nine Cats!"

So here are pix of most of the cats mom has known in her life.

This is Orfy, the first cat mom ever knew! He was there in the house when she camed home from the bean vetty hospital. Of course, he was a growed-up cat then, but we couldn't find that picture. 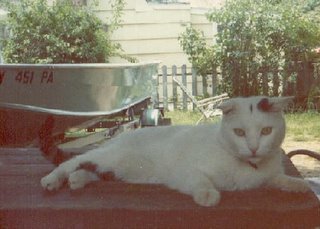 Then there is Two Bits - I bet you can guess why he was called that! And you can't see it very good in this picture, but he has the cool raccoon-stripy tail like me, Finny! And see his flat ears? He had terrible ear mites when he was a kitten and they hurted his ears bad and his ears wouldn't stand up rite after that. But they worked just fine otherwise. 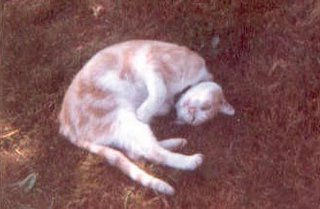 Around that same time was also Sandy - he was a very tough guy who fought with all the other neighborhood cats and allways would come home with scratches and bites on him. But he was nice to the bean kids. Sandy and Bits both lived to a ripe old age. 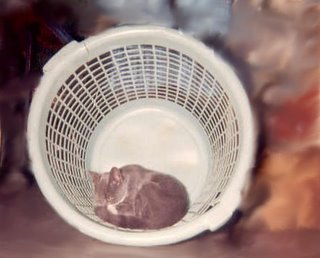 Next is "Sorry Charlie" - granma sez there was too many cats alreddy and he would have to leave. But he stayed for a couple of years anyway and one day he wandered away to find a new home and bean family.

There was a nice ladycat who came to live with our family for a while, her name was Kid, but we couldn't find a picture of her. Mom got sad when she told about Kid because one day some bad bean shooted her with a BB gun and she was hurted so bad the beans had to help her go to the Bridge and the vetty bean found out she had baby kittens in her tummy too. But we know she must have been such a nice cat to adopt our family. 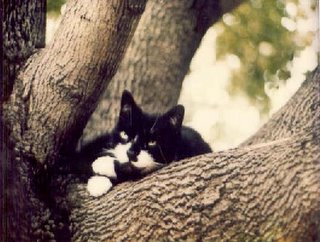 When Bits and Sandy were maybe 11 or 12 years old, the family adopted two more cats! Known all their lives as "the kittens", Sox and Jennie were not littermates but adopted from the same place. Kitty Sox was an adventuress and she even liked Pax the drooler that came to live with them when the kittens were a year old. Grampa was Pax's favorite person! 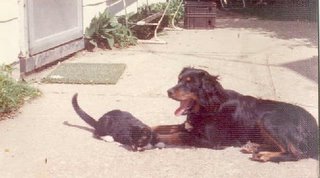 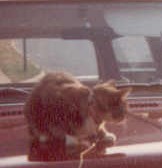 Jennie was very timid and quiet and she was mom's favorite. She was also called Jennie-Bird because she made little chirpy noises like a birdy! She lived to be 19 years old and Sox went to the Bridge a few years before her.


Mom bean was a grown up and had moved away to Michigan and was very sad living all by herself without any cats to train her or take care of her. So one day she went to the Lenawee County Humane Society thinking she would get a nice grey cat like Jennie bird. Well she looked at all the growed-up cats and they were ALL sleeping, except for one short haired white cat and one long-haired white cat! She walked slowly by all the cages and talking to the cats (even tho they were sleeping) but the short-haired white cat was awake and he talked to her and played with the string on her shirt...and when she moved to look at the next cage, do you know what he did?

He putted his paw out of the cage and tapped her on the shoulder!! Mom bean knew right then that she didn't have any choice and this cat had picked her out. His name was Jasper. He lived with mom for 10 years and 3 months, but he got diabetes and something was also wrong with his liver like cancer or something else bad. Even though mom and the vetty beans tried very hard, they couldn't make him get better and they had to help him go to the Bridge. Mom is going to tell more about him on Friday, because that is the anniversary of the day he went to the Bridge to wait for her.

And three years ago, Buddy came to town!!

Wow, your mum has lots of kitties. Plus you remember names and have pictures.

Yes, I am now OK with not being the first kittie. 'Specially now when lots of other are sharing their earlier kitties.

Oh what a wonderful cat loving mom you have! Our mom had a pure white kitty with green eyes when she was little. Maybe that would be a good subject for a future blog. Lick you mom & tell her she is awesome!

Ivan and Izzy from WMD said...

Wow, you mom has had a lot of kids! She most be just about purrfect with all that training!

I always say that when your human has had other pets, it was just to get her trained right for being owned by you!

Thanks for the great stroll down Memory Lane...It's the closest thing I've had to getting outside of the house in ages!

Wonderful stories and pics! Our mom & your mom are both kitty people...and they kiss our bellys too much...hmf!

The Whippy Curly Tails in the Toasty South

Look at the advantages of having a Mom with lots of previous experience - they are very well house trained!

How wonderful that you mom grew up with lots of kitties. Ours did too and that's why she loves us to much. Good moms are hard to find!

Sounds like your mom has a very good resume. It's no wonder that Jasper, and you, and Buddy and all the others have picked her.

I hope someday my experience will impress a little monster.

This is an excellent post. I'm glad your mom has done such a good job telling you about all those others. Never forget them.

Great post. Always good to see some pictures of cats doing what they are really good at...sleeping! My cats do the same and the older they get, the more these little bugger sleep :)