The (First) Best Cat Ever

We're letting Mom take over the blog today (just today!) so she can tell about Jasper, our Guardian Angel who waits at the Bridge. So this post is dedicated to him and our Gramma, you'll see why. Thanks for training mom and bringing us to her, Jasper! -- Buddy & Finny 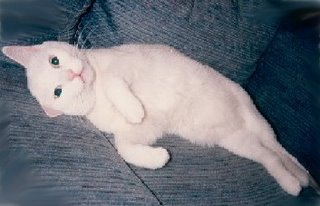 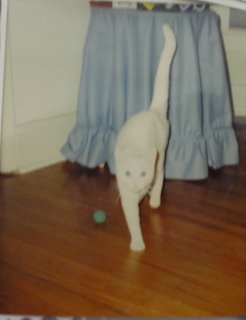 Jasper adopted me on October 20, 1990. Jasper was about a year old and as I've come to learn, one-year old cats are still kittens, they just don't look like it! 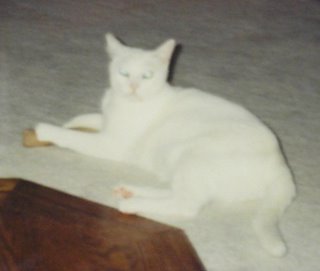 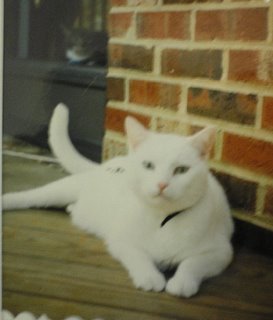 In the summer of 1999 Jasper was diagnosed with diabetes and I learned to give insulin shots. Unfortunately, we couldn't get the diabetes under control and in January of 2000, after several days of illness, the vets figured out that Jasper was also suffering from liver trouble, probably cancer. It was inoperable (at that time, things have changed) and after several days of tests and continual deterioration, I had to make the most difficult decision to let him go ahead to Rainbow Bridge.

My mom, from whom I get my love of cats, was with us, dad was in and out of the room. I was sitting in a chair holding Jasper and mom was leaning over us from behind as the doctor did what had to be done. Jasper slipped away with me telling him how much I loved him and thanking him for sharing his life with me. My vet was wonderful, letting me hold him as long as I needed, slowly walking away when I finally gave him to her, stopping so I could give him one last kiss.

As we left the office, mom told dad she wasn't feeling too well and could we stop by her dr.'s office so they could check her bp. The dr.'s office wasn't closed and mom said maybe you'd better take me to the hospital. Turns out she was having a heart attack! Thankfully it was a mild one, but she did spend several days in the hospital. The day after the heart attack, she told me that as she was drifting off to sleep, she felt a weight against her arm where Jasper used to lean up against her while taking a nap during his visits to their house. That night she had a dream that Jasper was met at the Rainbow Bridge by all the cats from our family, who welcomed him and told him stories of me when I was a little girl.

My apartment was unbearable without Jasper, and six weeks after he left, I visited S.A.F.E. Haven for Cats and met Finnegan. I'm convinced Jasper picked him out for me and Finny was a great help in healing the pain of Jasper's loss. He always seemed to know just when I needed a hug or to see him chase his silly raccoon-striped tail. 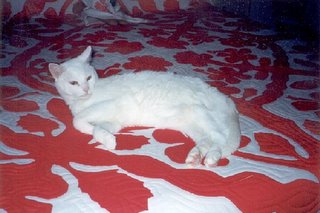 Jasper about a month before he passed. He's laying on a Hawaiian style quilt that my mom made. Jasper was the only cat she allowed to lay on it because he looked so perfectly handsome there. Mom recovered from her heart attack with therapy and lots of exercise, and 4 months later, on my 40th birthday, we did a 5-mile MS Walk together. Even though it was pouring rain, she was determined to do the whole thing and she did! 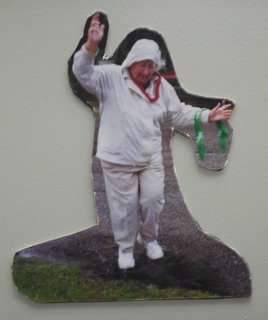 Mine Mom gives monies to Safe Haven For Cats. Jeri is the bestest lady!

We all read your story and luved it.....such an amazing tail!!!

Wow! What a great story. Despite my belief that humans are incompetent and should be barred from using computers, your mom did a bang-up job telling it!

I am so happy you are coming. Daisy am coming to and her lives in Lougton. Her Mom says that is close to you, you can come together. Daisy does not have a blog, but if you want to get in touch with her, let me know and I will give you her email address.

It am OK if you snores....Mittens does too, so does mine Dad. He dont know bout this nap a thon, but will be sleepin in the bedroom and snoring....

Jasper was a handsome dude, wasn't he? I'm glad he picked Finnegan out for you, he knew what you needed!

What a touching story. Thanks for sharing it with us.

Thank you for sharing this story and telling us about your Jasper. I found your story inspiring. My home does feel unbearable, but I am still just so uneasy about welcoming someone new. I know Ep eventually will lead me to someone who will pic me. It's been six weeks today that I have been alone. Thanks again.

Congrats to your mom on coming through OK and to you both for finishing that race!

Sorry, one more comment...was your mom wearing all white? She almost looks like Jasper! :)