Finnegan J. Katz for the Defense 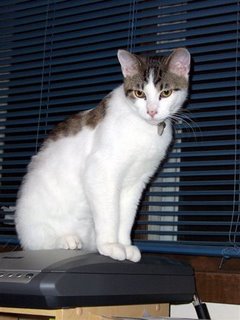 Our friend Victor Tabbycat has been unjustly accused of a heinous crime. For details, I refer you to Victor's blog, shared by his "sister" Bonnie Underfoot.

Now, I will purrsent the facts to show that Victor is being falsely accused of having committed this crime.

1) Bombay has stated that Victor was with him during the time period in question. As we all know, Bombay resides in Singapurr, a fair distance from Whiskonsin.

2) The report on Victor's blog (signed by "lambj") indicates that Victor has a history of attacking defenseless plants. However, Victor was never found guilty and in fact, the charges were dropped. This means that the prior episode has no bearing on the current unjust accusation.

3) With the following exhibits, I shall demonstrate that Victor does not have a propensity for "nibbling greens" as the report by lambj states. 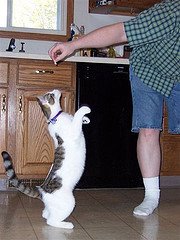 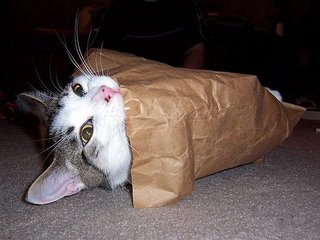 Exhibit C - Victor likes (and has plenty of) toys 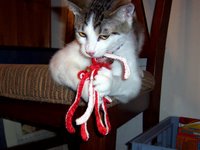 Exhibit D - Victor Tasted - but didn't like! - the Christmas Tree

"This branch was nice and low for me to grab, so I bited it, but it doesn't taste very good. Kind of prickly-sticky. Bonnie just sat on the couch laughing at me."

The defense requests a recess at this time as mom bean is preparing our suppers.

When we return, we will addres the issue of Miss Underfoot's prolonged and consistent attacks on Victor, as well as her pleas to the beans to "get rid of him".

Excellent argument - but I side with Bonnie. Intruder be gone!

I find your arguements most compelling and per the law of reasonable doubt. I would find the defendant, "not guilty".

I believe this case should be dismissed.

Finnegan,
We would like to keep you on retainer - you know, just in case we ever need representation. You are one SMART kitty.
signed,
moose, turtle, and nala

Oh, we know for a fact Victor is innocent....see...after he was at Bombays, he made a stop here to check out how the olympic's are going. We took him on a tour of the inside and outside activities, then we had some stinky goodness. NOT GUILTY.....

Good job, Finnegan (by the way, what does the J stand for?) This jury member is totally convinced - Victor is innocent!!

Mr. Katz,
Fank you fur your thorough research for my defense. I feel I must inform you that, in all honesty, I'm not really, entirely, innocent. However, it was an accident. I thought it was a green cat toy... a case of mistaken identity!
Also, Bonnie is definitely innocent. Mom an I were alone in the bafroom when it happened.
Will you still help me? I fink we can call a few character whitnesses.
Fanks again,
Victor Tabbycat

Finny, you look very much in command

I went right over to Victory blog and told him next time to hide the evidence, I might be little but I already know you have to hide stuff!

We have to keep Victor free! I've started a petition on my blog.

I think that Bonnie is doing a cover-up. Clearly she is trying to lay the blame elsewhere. The girls try to pin all kinds of stuff on me, too.

Finny, we wants to know how much it would cost to keep you on retainer. things happen in our house that we have no control over, and we are blamed too. we needs a good lawyer on retainer. - Miles

Mr. Katz,
I am writing to request that you stop this defamation of my character. If you continue with these unwarranted attacks, you will hear from my lawyer.
Bonnie Underfoot

Finnigan, you are a very good friend to Victor and you have done a fabulous job of preparing your case. It's nice to see that Victor has a pure, honest heart as well. Such drama!

not guilty by reason of accident???

Bar Bonnie from trying to get him out of the house. It was a setup!!

It looks like you have a great law career in your future. Good work!! With all us blogging cats, you'd sure keep busy.

I wish I had your book-smarts, Finnegan! I guess all I can do is continue picketing in our livingroom.

Oh my goodness, the evidence is so compelling.

What an excellent argument. Bonnie had asked for assistance with her defense, but fortunately you seem able to see all sides to the story. As I am not an attorney I could not take it on. However, I will keep you in mind for the supreme court should I win the 2008 presidential election...