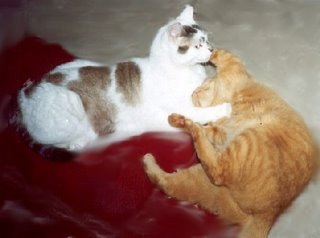 ...but I'll put my paw down when it's necessary!

Miss Bonnie hurted my feelings verry deeply wen she implied that I was being nise to Sully and that I woodn't agree wif ennyfing she said becos I allways agree wif Victor. I fink this is becos wen I was Victor's attorney during the unforchoonit insident (see May 5 & May 14) that took plase at his howse, Miss Bonnie somehow got the mistaken impression that I was accusing her of the possible crime or of framing Victor for the crime. 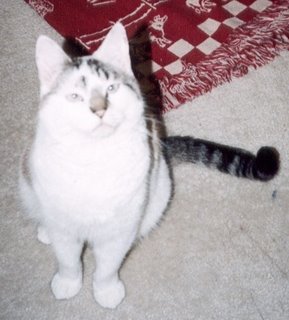 I have tried to apologize for this misunderstanding before (at the time that it took place) but I fear that my apology was not received in the manner it was presented. It is with my deepest and most heartfelt regret that I offer my apologies to you for any remarks I may have made that caused you to believe that I do not hold you in the highest regard.

I never had any intention of implying that a lovely, gracious, ladycat like yourself would have committed the crime that was purrpetrated at yore residence. I thought that it was evident from my final argument with the photos of cats who bear a striking physical resemblance to Victor, that my plan was to show that the crime was probably committed by an infiltrator to yore home.

I sinseerly hope that you will accept my apology and these tokens of my admiration. 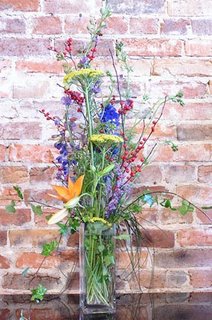 Oh, Finny! I'm speechless. I don't know what to say, and for me that's saying sumfing.
I'm still upset that Victor invaded my house, an I ofur react. Sumtimes I fink my beans like him best! I'm sorry I hurted your feelings. Fank you fur the loverly flowers an bird book.

Finny! Bonnie just posted an wouldn't let me read it. She was terrribly sad that she upset you.

Aw, how nice of you Finny. You're such a southern gentlecat.

Our mom's favrit fings, fleurs and birdies. That's next to cats that is!

Finny, I'm glad we got our differences out in the open and can be furiends. I'm an avid bird watcher an I'll speak to Mr. an Mrs. Cardinal bout sending their furiends your way. Mom said the candle cardinal is perched in dogwood, the NC state flower.
Purrs,
Bonnie

Awww that is so sweet. You poodies :) ~Merlin, Shadow, Ko Ko