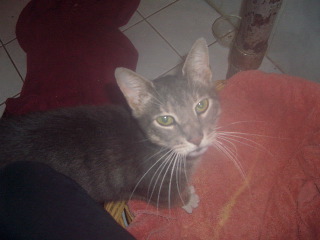 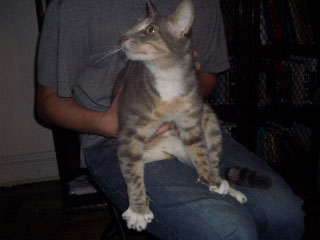 Isn't he hansome? Look at those grate big wisker humps!!

This is Columbo. He was fownd on the streets of New York City by some well-meaning beans who don't reely kno wat it means to serve a cat as we shood be served. They din't kno he wood want foods efurry day or that they wood haf to keep putting more litter in the litter boks.

These beans have a roommate who has a cat of her own, Mr Earl, who has diabetes and some other helth problems. So his good mom bean can't adopt Columbo becos it wood be furry upsetting and hard for Earl. The good mom bean has alreddy taken him to the v-e-t and made sure he is helthy and heer's wat she sed abowt him.

"He's less than 2 yrs old, FeLV/FIV neg, dewormed, neutered, semi-vocal, extremely friendly, cuddly, and outgoing. He's tall, long, and quite a hearty, strapping young'un. And quite homeless, too, of course."
If anycat or bean is in or near the New York area, please email us at finnegan_cat@hotmail.com and we'll get you in touch with the good bean abowt adopting Columbo.
Meows from Carolina Cats

Oh he is VERY handsome. I really hope he can find a home soon.

Wow, Columbo is very manly! And cute too.

Oh, poor Columbo. Obviously someone owned him if he's neutered. We hope he can find a home!

wow - he's got the longest whiskers we've seen! we sure do hope he gets a good home quickly.

Columbo's darling! I'll be visualizing the best forever home for him!

Oh he is a furry handsome cat. We are sure he will find a furry good home.

We are purraying he will find the bestest forebber home in de world.

Wow, that's some whiskers, and what a handsome cat. Sure do hope he finds a forever home.

Well, I sorta, kinda, mighta plucked it again... this mornin... in fronta Mom. She was sooooo mad, she made me leaf the room and... and... she SHUT THE DOOR! I hate bein shut out of the bafroom an she knows it. So I fink I's in trubul agin an mite need yur help agin. Sigh.