The 2,996 project is all about honoring and celebrating the lives of those innocent people who were murdered on Sept. 11, 2001.

John Paolillo was a Battalion Chief with the NY Fire Dept. - killed in the collapse of the North Tower. But more importantly, John was a loving father, brother, son, uncle and a friend to all.

John lived next door to my sister Marjie in Glen Head, NY. I met John once or twice "over the fence" - saying hi, borrowing sugar, neighborhood get-togethers, that kind of thing. The main thing I remember about him is that he would always be out playing in the yard with his kids Jake and Ella anytime I visited. John was very devoted to his kids, his wife, his mom Elizabeth, brother Joe, sister Sheila and their families.

John was a great athlete who loved to run, bicycle and swim - he competed in triathlons on a regular basis and enjoyed sharing his training philosophy with others. He helped Marjie with her cycling when she was getting ready for the MS 150 Bike Tour and an amateur team triathlon that she took part in. Marjie said John didn't understand the kind of mental blocks that held her back from getting up a hill - he just charged on up, knowing he could do it! The first time Marjie went riding after John's death, she took on the toughest hill in town - and made it up for the first time ever -- because she knew that John was there with her, helping her up the hill with a strong hand on her back.

A few months after John's death, his brother Joe, Joe's wife Josephine, friends Gina and Bob, as well as Marjie and her husband Chip, came together with the idea to hold an event that would not only raise money for a scholarship fund at the local high school, but more importantly, honor John's love of life and athleticism.

The Fifth Annual John Paolillo Scholarship Fund Memorial 5K race/fundraiser will be held this Saturday, Sept. 9 at the Glenwood Landing Fire Station. Hundreds of local friends and families, as well as firefighters from John's old stations in Manhattan and Brooklyn, will run or walk the route that includes one tough hill, some beautiful scenery, the high school cheerleaders and athletic teams, water stops, and lots of fun. 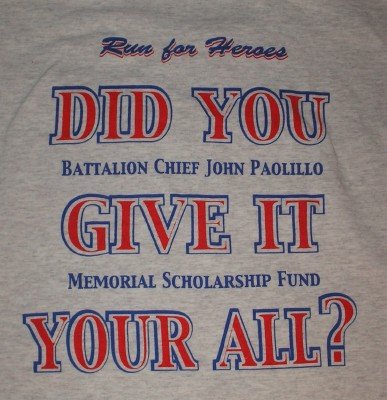 The commemorative T-shirt from the event demands to know "Did you give it your all?", a question that echoes with John's friends and family. When I attended the 5K in 2003, Joe told the story of going running with John one time and feeling that he could have done better. "Did you give it your all? Did you try so hard you threw up after?" asked John. "Well, yeah," answered Joe. "That's all you can ask of yourself," said John.

More than anything, the Run for Heroes is a celebration that brings together a community and helps to remember a wonderful man who was always ready to help others before himself. John Paolillo was an honorable man who will never be forgotten, nor should the rest of the victims of that terrible day.

Call your family, your friends - all the people that you hold dear - and tell them you love them, spend some time with them and whatever you do, remember to always "Give it your all!" 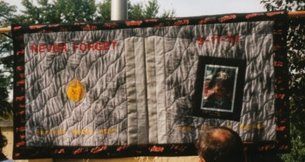 This quilt honoring John was made by our mom, Joan Peluso. It is displayed at the Run for Heroes every year. 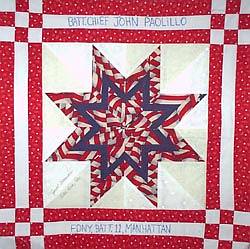 This quilt square is part of the "United in Memory" quilt project and was created by Janet Tetkoskie.
Meows from Carolina Cats

John sounded like an outstanding man and your memorial honors his memory.

our Lady's eyes are leaky again. what a lovely tribute to a great man.

OH HOW SOON WE FORGET

It is a support website for the Leaders of the Free World and our Military. It has a lot of interesting information on it plus a Forum where you can also have your say concerning matters on this.

Thanking you for your time, hoping that you will come for a visit, and would be honoured if you would have time to sign the Guestbook in support.

Would also be great if you could forward this onto another contact of yours to help support us.

That is extra special that you knew this great man. Most of us were given very limited information from which to get to know our assigned victims. It must be a bittersweet thing to be able to honor him but miss him at the same time.

Thanks for sharing your story. It was beautiful.

You can read my tribute to Denease Conley here. Thanks.

What a great man! Thank you for this wonderful tribute.

You did a wonderful job, and I'm so happy you contacted me! I could not have done such a wonderful tribute.

a wonderful tribute to an astounding man. thank you.
the memorial run sounds great. and i'love the t shirt.
hope for the future. while we never forget the past and the loved ones lost.
i did not know eric, whome i have written for. but i have to feel that i do.
i am glad to know of john too.

A very beautiful tribute to a true hero. Thank you for letting me know John. My tribute is posted at the Meezers blog. - Mary

Thank you for sharing part of John's story with us.

Great post. It is just sad to have so many good people gone from us to soon. Pray for their families, and for the men and women in our military, fighting and dying for us so that we hopefully will never have to go through this again.

Sorry I'm late commenting here. But I just wanted to say how beautiful your tribute was in honoring John Paolillo. So sad.

Thank you for your tribute to John Paolillo, for introducing him to me. Such a great man! I am trying to make my way through them all, this project was a great idea!