Reporting in from Gramma and Grampa's howse! 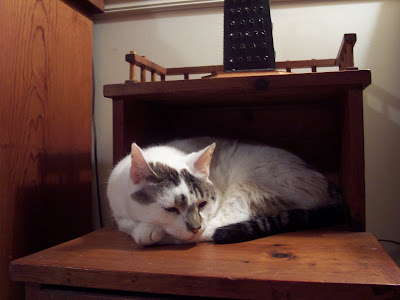 Grampa tolld me that mom wented to the bean toof vetty and he stoled one of her toofs and it hurted her a lot. Then one of her other toofs started herting and the toof vetty did some terribul fings to it and mom was herting efen more. One nite it was herting her so much that Gramma and Grampa went to Ant Ree's howse to take care of mom but they din't take me wif them! I could've helped my mom feel better by snuggling up wif her and purring purring purrrrrring.
I fink she is finely feeling better tho. Today (Sunday) she came to see me and we had some nise snuggles. Then we wented owtside on the deck and she gave me a nise long brushing wif the Zoom Groomie. That's prolly wat made her toofs feel better!
I am having lots of fun playing efurry nite wif my unkle Iz. We play chasies and Thundering Herd of Ellyphants all arownd the howse. It's a little bit tuff wen you don't haf an upstares, but we manage OK.
And efurry day I go owtside wif Grampa for an impawtant job - getting the male that the man in the bloo shorts puts in the maleboks. I don't haf to go in a stroller or a harness or anyfing! Grampa just puts me up on his sholder and owt we go!! 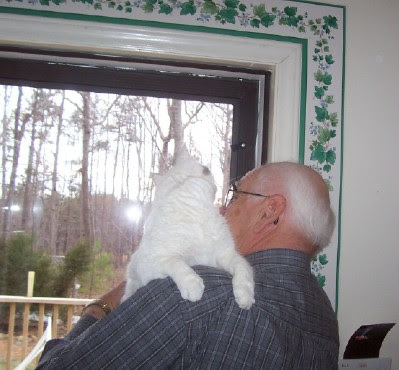 Prezzies and a Get Well!

This is some pix of me and Grady wif the prizes that Miss Tiger Lily sended after we were the 1,000th visitors to her blog. Her daddy bean maked the arrow nekkliss himself! I fink it's reely cool but it's kind of big on me, so I'm gonna let mom ware it sometimes. 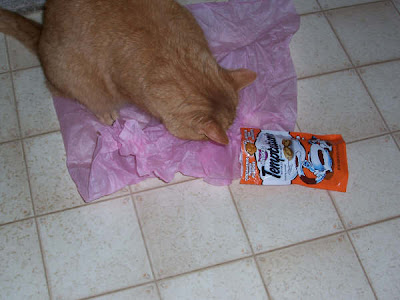 Oooooo, a bag of Temptayshuns just for me! 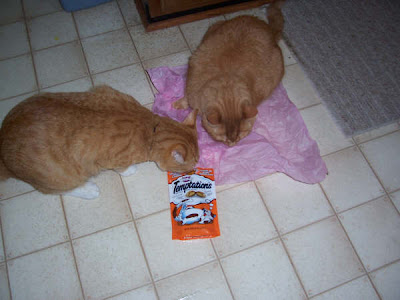 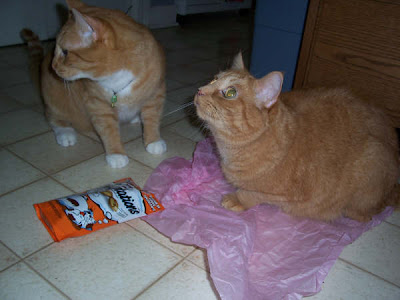 What else is in the box, Mom? 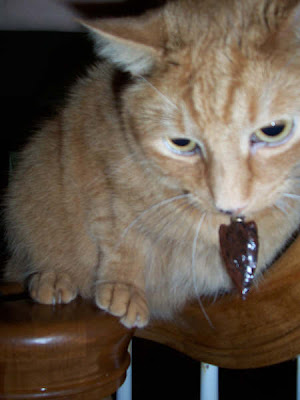 The furry cool arrow nekliss that Tiger Lily's dad maked all by himself! I can't beleef he doesn't need help from Tiger Lily or the other cats.

Miss Tiger Lily's sisfur Miss Jemima sez that Tiger Lily has not been feeling well for a few days, so pleeze, efurrycat go by her blog and give her some get-well wishes. 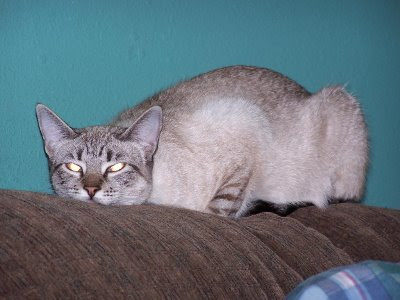 IN CONGRESS, JULY 4, 1776 The unanimous Declaration of the thirteen united States of America

When in the Course of human events it becomes necessary for one people to dissolve the political bands which have connected them with another and to assume among the powers of the earth, the separate and equal station to which the Laws of Nature and of Nature's God entitle them, a decent respect to the opinions of mankind requires that they should declare the causes which impel them to the separation.

We hold these truths to be self-evident, that all men are created equal, that they are endowed by their Creator with certain unalienable Rights, that among these are Life, Liberty and the pursuit of Happiness. — That to secure these rights, Governments are instituted among Men, deriving their just powers from the consent of the governed, — That whenever any Form of Government becomes destructive of these ends, it is the Right of the People to alter or to abolish it, and to institute new Government, laying its foundation on such principles and organizing its powers in such form, as to them shall seem most likely to effect their Safety and Happiness. Prudence, indeed, will dictate that Governments long established should not be changed for light and transient causes; and accordingly all experience hath shewn that mankind are more disposed to suffer, while evils are sufferable than to right themselves by abolishing the forms to which they are accustomed.

We, therefore, the Representatives of the United States of America, in General Congress, Assembled, appealing to the Supreme Judge of the world for the rectitude of our intentions, do, in the Name, and by Authority of the good People of these Colonies, solemnly publish and declare, That these United Colonies are, and of Right ought to be Free and Independent States, that they are Absolved from all Allegiance to the British Crown, and that all political connection between them and the State of Great Britain, is and ought to be totally dissolved; and that as Free and Independent States, they have full Power to levy War, conclude Peace contract Alliances, establish Commerce, and to do all other Acts and Things which Independent States may of right do. — And for the support of this Declaration, with a firm reliance on the protection of Divine Providence, we mutually pledge to each other our Lives, our Fortunes and our sacred Honor.
Meows from Carolina Cats 8 comments: