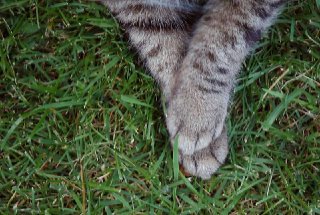 This picture of our friend Kitty, but just his paws, inspired mom 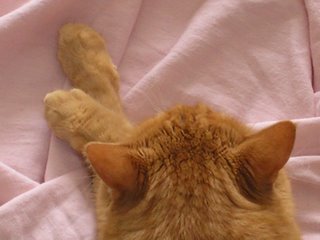 to try to take a picture like it of Buddy's paws.

So then I had this idea...get your bean to take a picture of you, but just your paws. It could be just one or all of your paws, you could put something in the picture that is a hint of whose paws they are or make it hard. You could even use a picture you already have, just crop it so only your paws show.

Then email it to me at finnegan_cat@hotmail.com, we'll post all of them with no names, just numbers, and see who can figure out which paws belong to which cat! The kitty who gets the most right AND the kitty who stumps efurrycat else, will win a prize.

Let me know if you think this sounds like fun and we'll make a deadline for the pictures of paws of...Friday, Feb. 10. Then we'll get them uploaded and efurrything by Monday and start the contest. 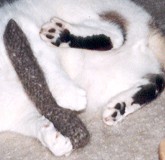 What a great idea! Mum, where's the camera? (I'll be the kitty with the BIG paws!...ooops, does that make me too easy to guess?)

Sounds likes lotsa fun. I will have to have mum check our pictures. She does have pictures of just my paws.

Paw and furry toes...Mom loves to kiss our toes. We think she is crazy. Your paws are great.

Mom posted my story...come read about me!

Tannie Man,
The Whippy Curly Tails in the Toasty South!
=^..^=

That sounds like loads of fun. I'm going to get mom to check my pictures right now...MOOOOOM!!

This sounds like a septional idea. YES YES...Mittens says it isnt fair cuz everyone knows, since the Nap A Thon, her haves extra toes.......We will send pichers......

Gosh, that will be really hard to guess which paws are whose, 'cause so many will look alike. We'll make Mom look over our pictures and send one of each of us.

Hmmm. A contest worthy of my interest. Yes. I will make my woman display my lovely paws for you. Good idea.