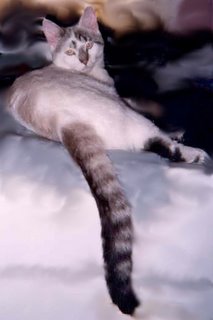 This post is all about me, Finnegan J. Katz!

In January, 2000 some beans found me at an apartment complex where I was living owtside. I had to eet garbij out of dumpsters and sleep owtside even in the rane and snow. The girl bean was nise and she took me to the good shelter plase called SAFE Haven for Cats and they took good care of me. I had an owie in my furrs and they cleened it up, they gave me the hoo-ha-ectomy and some owie shots too.
One day a bean stoppt in front of my cage and was talking to me a lot. She kept talking and talking to me and putting her fingers in the cage and I rubbed against them and I knew I liked her alreddy. The lady in charge sed you can open the cage and I had my chance! I walked owt of the cage and climbed rite up the lady's body and gave her a big hug wif my paws arownd her neck on bofe sides and I put my hed on her sholder and purred and purred. She hugged me back and sed "This is my cat" to the other ladies and they laffed. 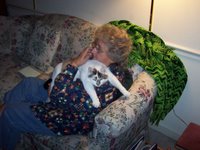 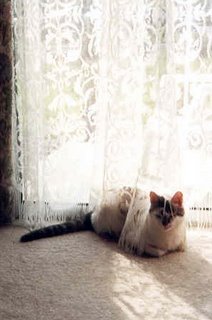 This is me and Granma. She is a verry good servant to cats. She has been trained by cats allllll her life! When mom bot these curtanes wif the lase and frinj on them Granma sed "Uh-oh the cats will play wif it and rune the curtanes." But I am a gentleman cat and I woodn't do that.

Granma's mom bean was a good servant to cats too and she did allways say "In again, Finnegan?" or "Out again, Finnegan?" whenever she opened a dore and mom allways thot it wood be a good name for a cat, so wen I dopted her I tolld her I wood take it for my name. 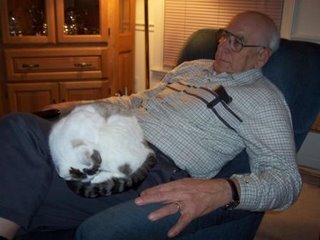 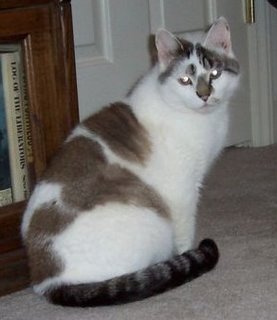 This is me and Grampa. He finks I don't like him becos he is big and makes coffing noises in the morning. That's not wy though. I never tolld anyone but it's 'cos of the mean man bean who din't like me and was gonna put me bak owt in the snow. I do like Grampa and here's the proof. And allso Grampa says I am a devil-cat and he got the pikcher to prove it!

You're so furry handsome Finny! I's furry glad you don't gots to live in the snow and rain no more. Snow and rain's only fun to look at from the inside.

Great story from a great cat! We like the putting your arms around your mom at the shelter part the best!

You are lucky you found just your right Momma, Finnegan. some poodies aren't as lucky as you guys and we are and wait furrever. ~Merlin, Shadow, Ko Ko

Memories of Eric and Flynn said...

We liked reading your story too and are furry happy for you that you got a loving forever home. You and buddy are both handsome kitties and we liked looking at your pichers. We liked Buddy doing his yoga, Flynn does it sometimes, but my bones are too big for me to do it. Big purrs to you for coming to look at our new blog.We'll put links on when we work out how to do it.

Thanks for sharing your story Finny! It sounds like you chose the right momma for you and you both "got lucky".

I like your story Finnigan. It is a good Cat story. Plus you have a very handsome tail. Matches the rest of you perfectly.

Ivan and Izzy from WMD said...

You're what my mom would call a very lovey-dovey boy, Finnigan. It's good you have people you can be lovey-dovey with!

That a great story Finny! I like the pictures of you with you grambeans. I hope blogger lets you put more pictures. I'd love to see them.

That's a furry nice story, Finny. My woman sumtimes says, "In again, Out again, Finnigan, Begin again," but she wasn't sure where it came frum. Now she'll fink of you. Nice pictors, too.

I didn't choose my beans, they snatched me away frum my brofurs an sisfurs wifout askin my purrmission. But Victor dopted my woman right out frum under my nose.

Oh, Finny, isn't it great to know you chose the right Mom an she lurves you so much? They'll efun furgive us fur hurtin plants an hidin unner the curtains. Would you pleeze vote fur us in the Blogs of Summer contest? We'd preciate it. The link's on our site.

That is a nice adoption story. You are obviously a cuddly boy like me. I'm afraid I was fast asleep when my humans came to choose a kitty, it was my clever sister who got us both adopted by being purry and cuddly.

Finnegan, you are the sweetest!! You so remind me of my Danny Boy(RIP)! I love the pictures of you w/Grandma & Pa! Too sweet! I'm so glad your mommie rescued you!

What a wonderful biography, Finny, and very well said, too.

what a great home you choosed! your beans are just lucky they've got you an not Midnight cause she woulda shredded those purty curtains right away
Cocoa

you really did getted a great furrever home Finny! Mommy finks you are so furry handsome.

Wow, Finny, that's a grate storey. Yoo shood be an awthur! I mite look like yoo win I grow up becuz I'm wite with brown splotches. Somehow, the splotches look better on yoo. Yer lukkey to have curtins. We don't have any curtins. They look like they'd be fun to clime.

Thank you for sharing the story of your roots and how you found your forever home! I think I mispelled- isn't it furever home?

We're so glad you picked your Mom so we all gotted to know you. That's a nice story wif a good ending in your furever home.

Finnegan is a most extraordinary cat with his lovely color and markings! What a doll...

When you are in a shelter and the right person comes along, you just know it. That's what happened with me too. I climbed on my Mom's shoulder and sat like a parrot and ate her hair and right then she knew to not even consider another cat. Thanks for the great story!
--Jasper