The fun cats over at Emma's Place named today Frisky Friday and put lots of fun playing pikchers on there blog! We really like that and desided to do it too - thanks for the grate idea, Emma!

A furrend of ours grows his own 'nip, so he sent us some toys to "test" to see how good they were. This is me inspecting the packaging - it ALLLL smelled like nip! 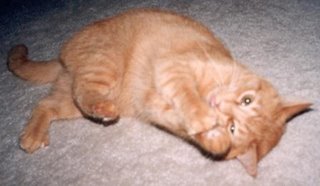 Buddy had one of the little toys - they playd good and Buddy liked tossing them up in the air, but they got losted furry fast. We think maybee they are under the fridgerater.

This was the BIG toy! It was really good for kicking, it was nise and hevvy but floppy too. 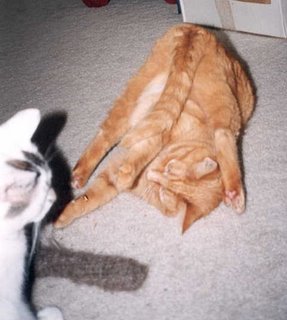 Finny allways is saying he gets the bigger toys or the more treets or first hugs from mom just 'cos he was heer first and he is ollder than me. Sometimes he is an old poop so I was trying to get him to play wif me some more. Granma looks at this pikcher and says "Buddy, cats can't DO that!" But I am furry limber and I do lots of yogas efurry day! 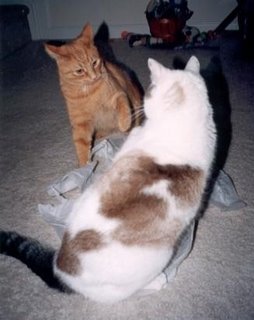 And sometimes you can get TOO frisky!

Hi Finn & Buddy!! Thanks so much for visiting Emma at her new bloggie! We have bookmarked your site and will link to you! K?! Frisky Fridays rule! Great pix, btw!

I didn't know it's Frisky Friday, but I put up my pictors showin how to play wif toys, an that's purty frisky!

Buddy, you ARE limber. That's a summer salt, right? I do that, too. Nice nip testin, boys. If they need more testers, you haf my email :-)

Don't forget my birthday party! Starting in about an hour, bring drinks and snacks and nip (if you take it, I prefer shrimptinis myself)
Everyone is invited (although, given my age, I may retire frequently!). Paws up, charlie is in charge of the games, he says he got some ideas from recent parties.....[shakes perfect head] actually, for a snotrag he's done a good job!

I think cats do the best yoga. I've seen beanmom try to do yoga, she's pretty useless at it, if you ask me, but she gets 10 points for effort.

we came offur ta say hello an nice ta meetcha. come to our bloggie an say hello if ya want. we love nip too!

Hahahaha! I get the same way when I overindulge in my 'nip.

Wow! Yall sure were frisky! It looks like lotsa fun!

Buddy you are most bendable!

I forgot to tell you....about the homegrown grass......Mittens eats it all, she is a real pig and pulls it out by the roots!!!

You two are furry funny! Obviously the catnip from your friend passed the test. I'm telling Mom that we need to have Frisky Friday at our house too.

Buddy, you are so athletic! I have interesting news on my blog today - fellow gingers Big Eric and Flynn have got a new blog, please visit and say hi to them if you can!

Just wanted to let you know the package arrived safely just now! Thank you soooo much! Wonderful prizes. Blogger is being a pain about uploading pictures right now, hopefully we will get things posted on Wed morning. (that is the plan)

Buddy you are just too funny!
Today you are a Bendy Buddy!